skip to main | skip to sidebar

Craft Book Challenge... without the book

Well, there is a book, I just don't get along with it very well.  My two last projects, meant to be my CBC for February and March, were supposed to come from this book, but the patterns were all wrong for me and so I had to toss the book aside and improvise, which turned out to feel even better.  It made me realize that I can do stuff my own way and it can look as good as the ready-made patterns.  Huge boost for my self-esteem.
So, the book in question is Sew!, by Cath Kidston. 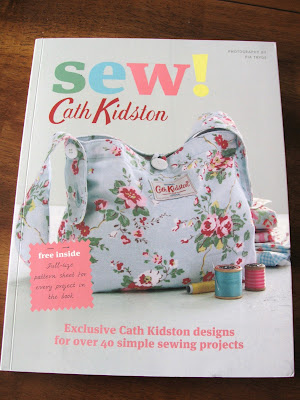 It is a very good-looking book with great ideas, and I don't regret buying it.  In fact, I am trying a third project from this book, knowing that if I get lost again with the pattern, I can change a few things and work it out.  My first attempt was a needle book, shown here in the book: 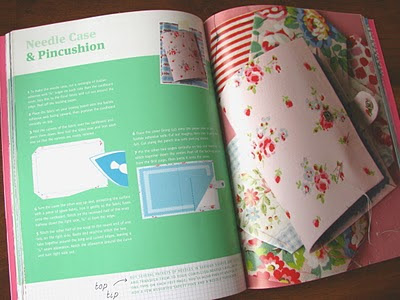 And here as it turned out: 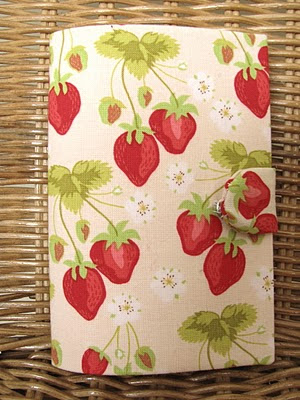 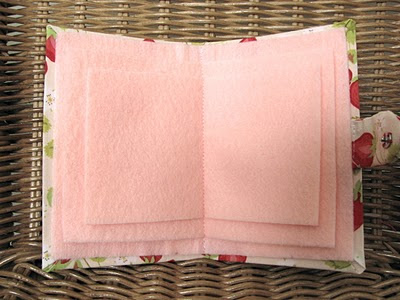 I thought that using fabric covered cardboard was a bright idea, that is until I tried it and realized it did not really work out well.  My main problem was that my Heat'n'Bond stuff did not really stick to either the cardboard or the felt, so that the whole thing was coming apart.  It might be that I was using the wrong stuff, or that I did not know how to use it.  Anyway, I had to add a few stitches here and there to secure it a bit, but it ended up looking a little too cheap for my taste.
You can see below what it looks like from the back, where I had to sew the strap. 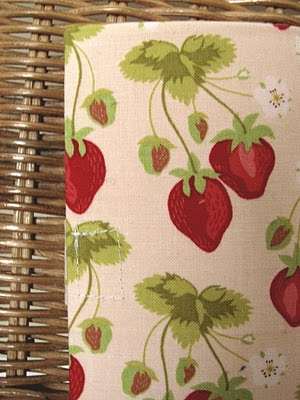 I was not about to call it quit, though, so I made my own version, inspired by the pattern, but without the cardboard and the fabric adhesive.  Everything is sewn and nothing will come apart with this one.  It is not as sturdy as the one from the book, but I wasn't really into it to begin with, so I made mine a soft cover with a sheet of felt as batting. 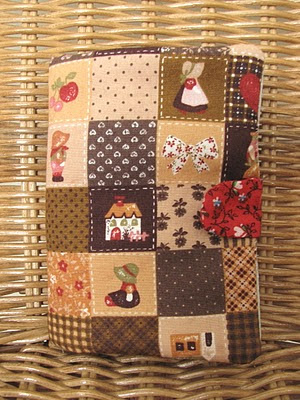 I like this one much better and as you can see, I have already found some use for it. 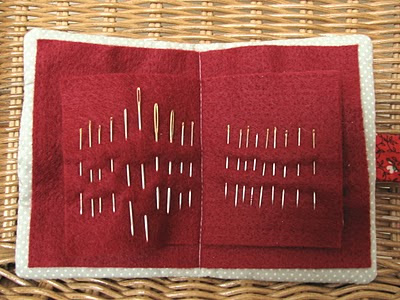 My second attempt was a fabric-covered coat hanger. 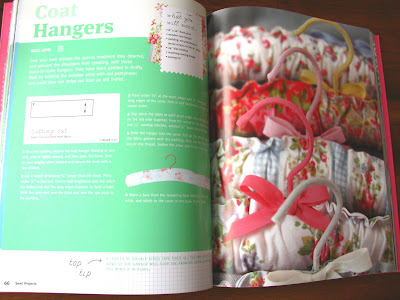 I have to report that I did not go very far with this pattern.  I read the instructions twice and could not make any sense of them.  The measurements were all wrong for the hangers that I had, and the gathering technique did not seem to me like it would work.  I was still on my guard from my recent experience with the needle book, so I used the book as inspiration for the choice of fabrics and I just drew my own pattern to fit my hangers. 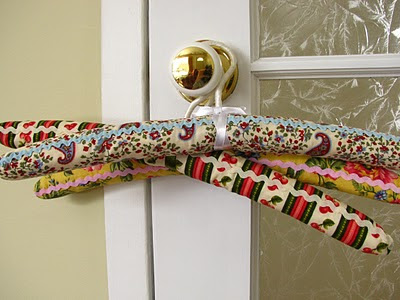 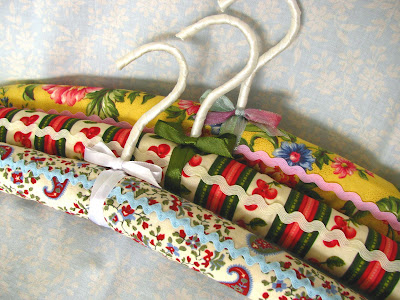 I am still surprised they came out so good, and I can see a few more of these hangers in a near future, because these were given to my mom for her birthday, but I want some for myself as well. 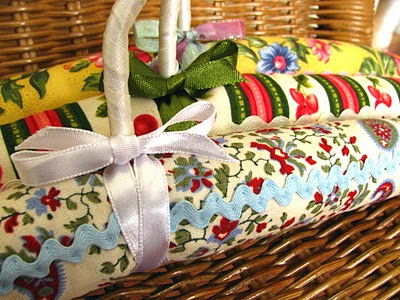 So far, the CBC has been very revealing to me.  I have learned not to be afraid to try something new, and I have learned to trust my instinct and to improvise.  The three patterns that I had chosen lacked some instructions, and I have had to stop and think to find out how to get to the result in my own way.

My next project again comes from Sew!, and hopefully I can work around that one too.  I will show you soon what I am up to.
Posted by Maevy at 20:05

Maevy
My name is Sylvie and I live in beautiful Quebec City in Canada, with my woodworking boyfriend and three turtles. I like sewing, watching birds and gardening. 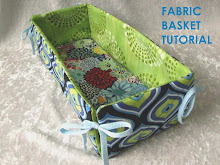 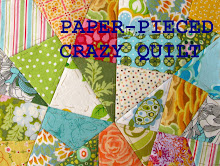 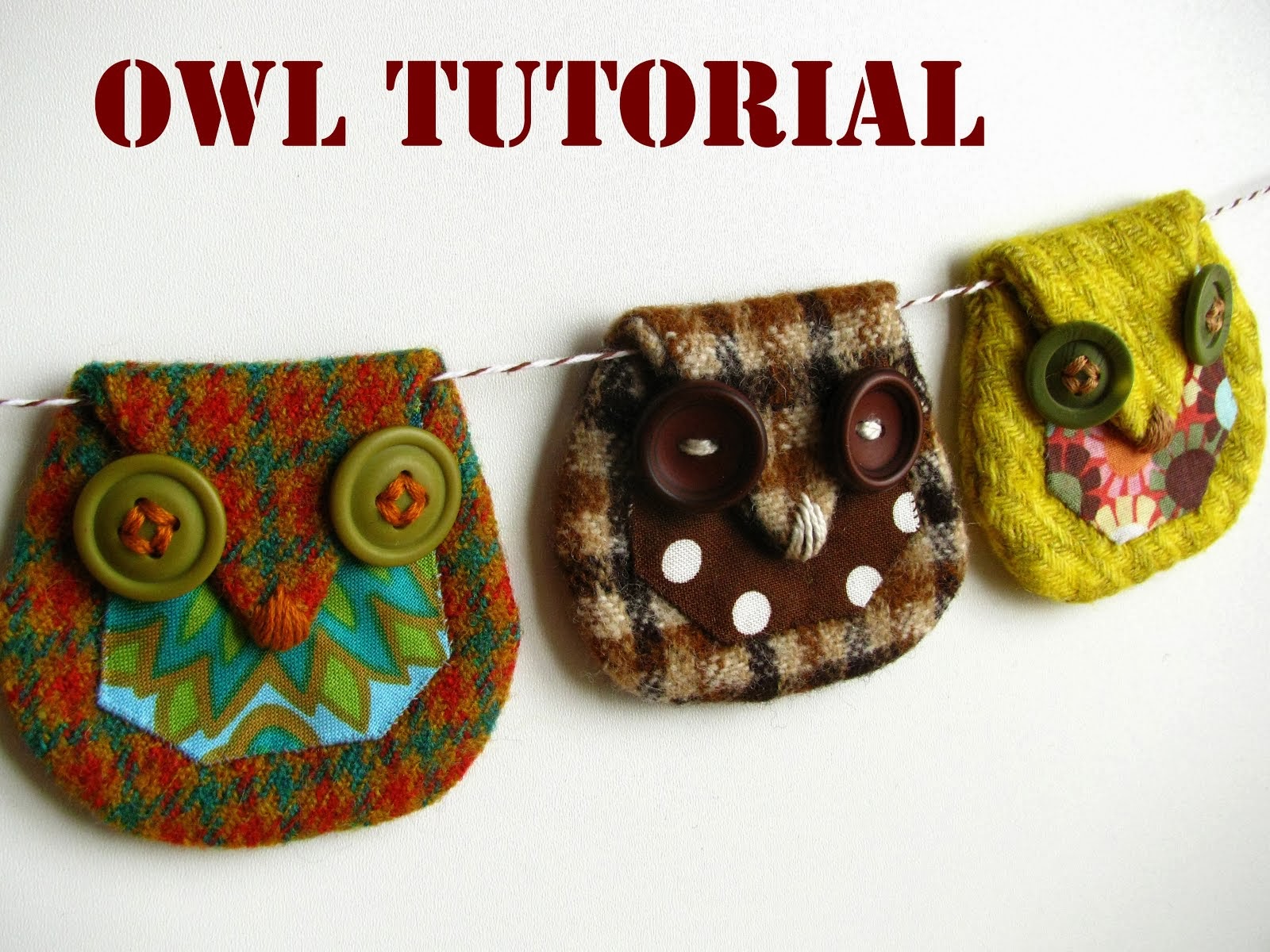